Whenever I listen to Samjhawan*, I am transported back to those wonderful memories. Especially Navodayan memories, so nostalgic... 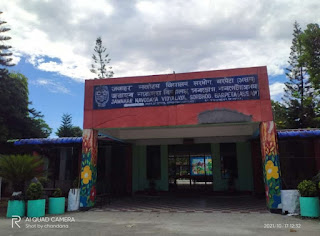 All the above-mentioned songs are my all-time favorite, these are nostalgic too. I’m emotionally connected to these songs. The main reason behind this nostalgia is that I used to listen to these songs on 9XM, Every Sunday, in JNV.

Okay, you can listen to these songs later, let's move on to my Navodayan memories, and let me know about your JNV memories in the comment section below right now.)

So, whenever I listen to these songs, I feel about my first love. JNV friends, JNV Crush, JNV love stories. I can't remember any specific memories but the complete JNV life is what I remember.

I remember the canteen. Like how we used to call our parents from the Canteen's phone and sometimes from Diganta's home. The second one was completely secret and illegal.

I used to read a lot of books and magazines from the library. Every week I used to issue one new book and after the next two or three days, I was waiting to issue another book.

I wrote a lot of poems those days. The first poem I wrote was when we visited the Beki River with P. Bora sir. I'm gonna remember this journey till my last breath. It was an amazing experience. I was thinking about my first love and wrote my first romantic poem sitting on the bank of the Beki river.

After that, it didn't stop. I wrote lots of poems during sports time, remedial classes, and study time too.

During sports time, everyone used to play football, handball, basketball, and whatnot. But I was like, “fuck sports I'm gonna play poem.” LOL.

While everyone was busy playing, I used to sit in the culvert of the teacher's colony route where students used to play badminton.

Maybe, I was the only guy in my class who was serious about literature at that time. I wanted to be a writer, wildlife photographer, entrepreneur, and whatnot. LOL.

Then Masud came on board. Masud and I used to write poems together. Prastuti used to write stories. I was a self-proclaimed poet and a well-known bathroom singer too. Ah! I miss those golden days.

Once, I was caught by DD sir when I and Kumaresh were hanging around the rooftop of Aravali house (Jr) to pluck and eat some Jujubes.

It was very tasty!

Kumaresh is no more. I can't speak to him now. I really miss him as I have shared so many memories with him. We used to sit together and in exams, we used to cheat sometimes. (Don’t do this guys, it’s WRONG. Cheating is bad not only in exams but everywhere.)

Once Yashodhara mam caught me cheating. But she did nothing. I was shocked because she was well known in JNV for her strict behavior. What a memory man! Then Kumaresh did the cheating all alone. That clever guy kept all the cheat sheets inside his socks.

I miss all the over-the-top dangerous crimes (adventures) we did with my partner in crime Kumaresh. I miss him a lot. Rest in peace partner. Love you more. 💚

I also remember all the Rashidul stories. He's like an essential part of my JNV stories. Whenever I'm like, let's tell a funny story from JNV, I remember him. We were from different sections but we shared the same house.

I also think about another day.

It was 31st December, maybe 2015. The cultural evening was going on. I was sitting on the last bench with P. Bora sir, talking about a lot of things. Sir offered me tea and we discussed a lot while drinking hot tea with my all-time favorite teacher.

I remember a slap, I'll remember it till my last breath.

There was a senior guy from the 11th standard. He was from the Nilgiri house, the same as Kumaresh. I don’t wanna disclose his name.

So one day this shit happened, a senior guy from my house (Shivalik) told me to hand over a pair of scissors to that Nilgirian guy. I went to Nilgiri house and searched all over the house including the basketball court to find him. But he was nowhere at that time.

So I asked Kumaresh to keep the scissors and I told him to give the scissors to that senior guy as soon as possible.

A little while later that guy showed up at my house and his friend pointed at me when he asked him something. I was standing, talking to my friends. That guy came up to me furiously and within a fraction of a second, he slapped me.

That (the most offensive swear word you've ever heard) guy slapped me so hard that I went numb.

After that slap, that guy asked me about the scissors. I told him everything and he was gone.

To this day, I still wonder, what if he had enquired before taking action? I mean what the fuck, it was a pair of scissors.

Also, I think I at least deserve an apology from him!

I remember the last day.

I was happy with my decision. I don't regret it even today, but I remember some of the faces - some happy faces, sad faces, some curious faces, and some special eyes full of tears.

Sabina cried a lot. Even Habijul cried. I remember when he hugged me for the last time and I said goodbye.

Thanks, Masud and Sabina, It's really unbelievable how you guys tolerate me even now.

P.S. Whenever I remember something about JNV from my JNV days and if I found it interesting, I’ll update this article.

Popular posts from this blog