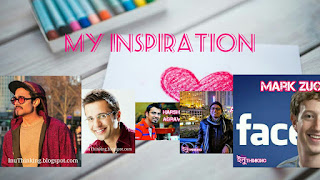 
Bhuvan Bam is an Indian comedian,singer, and YouTuber. His Youtube channel, BB Ki Vines, has four million subscribers and over 560 million views (as of August 2017). He has worked on web series likeThe Viral Feverand Happii Fi. He released his song named "Teri Meri Kahani" in collaboration with The Viral Fever Videos on Aug 2, 2016.

Bam's videos for BB Ki Vines are filmed using the front facing camera on a phone by himself. He originally uploaded his videos to Facebook, and then toYoutube.

Sandeep Maheshwari is a name among millions who struggled, failed and surged ahead in search of success, happiness and contentment. Just like any other middle class guy, he too had a bunch of unclear dreams and a blurred vision of his goals in life. All he had was an undying learning attitude to hold on to. Rowing through ups and downs, it was time that taught him the true meaning of his life.


"I’m Harsh Agrawal, and I manage an award-winning blog known as “ShoutMeLoud”.I’m an engineer by education and a blogger by profession. I have always been passionate about writing, so in 2008 I started my online blogging career with ShoutMeLoud." - Harsh Agrawal


"My name is Amit Bhawani and I am the chief blogger at Amit Bhawani Blog and where I like to share my internet/tech experience with my online readers on this website. I have been a webmaster from 2004 which is when I had registered my first company by the name Digital World Solutions. I have ventured into different online businesses like offering SEO Services, website development services, web hosting & business consultation." - Amit Bhawani

Mark Zuckerberg
Mark Elliot Zuckerberg(Born May 14, 1984) is an American computer programmer and Internet entrepreneur. He is a co-founder of Facebook, and currently operates as its chairman and chief executive officer.His net worth is estimated to be US$71.5 billion as of September 2017, and he is ranked by Forbesas the fifth richest person in the world.

Popular posts from this blog